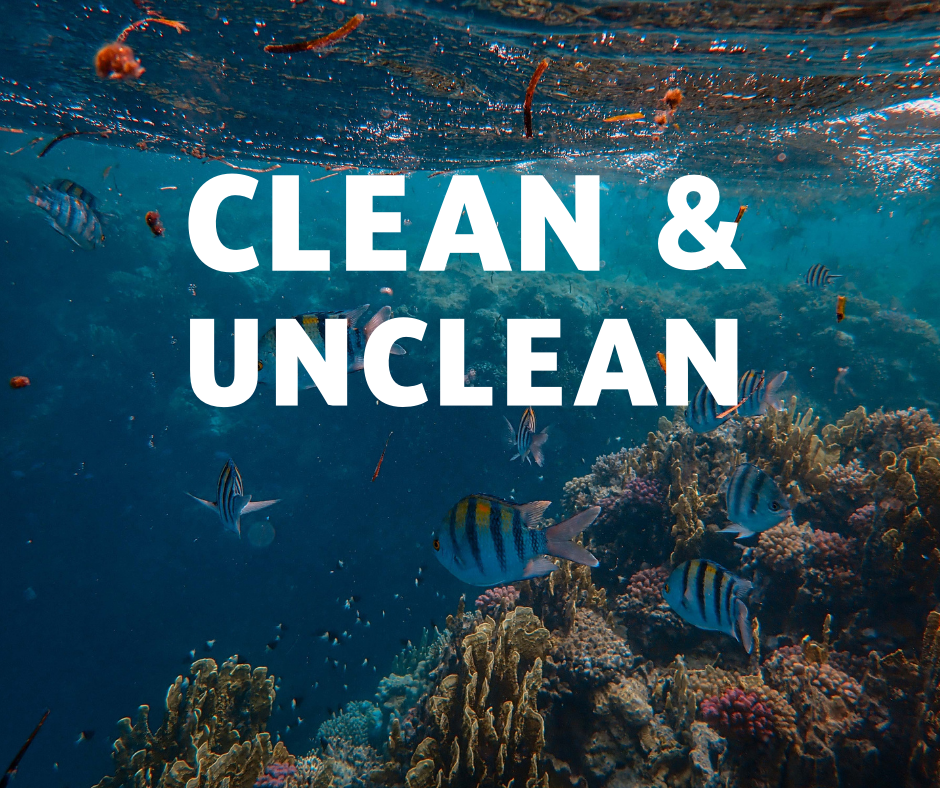 A common question asked by new believers in the faith is, “What common foods are clean or unclean?” This is a guide to assist you, the new believer. We are all to work out our own salvation. Philippians 2:12, So then, my beloved, just as you have always obeyed, not as in my presence only, but now much more in my absence, work out your own salvation with fear and trembling. That being said, we are also to assist our brothers and sisters in their walk, as well (Matthew 18:15).

As a new believer, you probably have already realized that the fruits and vegetables we eat are not in question, scripturally. Although that cannot always be said in this day and age, because there are certain waxes, for example, put on fruits for color enhancement which are derived from unclean sources. If you grow or purchase your produce from a farmer who does grow them, this will not (or should not) be a problem. If not, ask questions.

The animals are easy to distinguish. The pig is definitely unclean. Not only is the pig unclean, it is probably the source of most all of the conflict regarding foods. These items are or can be derived from pig: gelatin, lard, enzymes, di-glycerides, and/or mono-glycerides. When reading the ingredients of a product, the source of gelatin or enzymes is not required on product labeling.

Although it helps greatly to check for kosher symbols, you are wise to call the company if a product contains gelatin, enzymes, natural flavorings, anything where pork by-products or shellfish could be hidden. There are some who feel that to worry about “enzymes” is burdensome and left to the individual. If you put just a drop of poison in an entire cup of sugar, would it be safe to drink? What would Yahshua do?

Fish, like trout and salmon are good to eat but catfish (which actually has a skin) is not. Bottom-feeders generally are unclean and would include shrimp and lobster.

Do you notice a common thread here? The unclean items are the ones the “world” is drawn to and tend to be the most desired food products and, at times, the most expensive (such as lobster and shrimp). Fins and scales are easy to determine.

Yahweh makes a very clear comment in Leviticus 11:46-47, This is the law regarding the animal and the bird, and every living thing that moves in the waters and everything that is on the earth, to make a distinction between the unclean and the clean, and between the edible creature and the creature which is not to be eaten. We need to make a careful distinction between the clean and unclean because our Creator, Who made these animals, is telling us which ones He created for our food.

Let’s look a little bit at food preparation. There are verses scattered throughout the Bible on preparing your food. For example, we are told in 1 Samuel 14:32-34, The people rushed greedily upon the spoil, and took sheep and oxen and calves, and slew them on the ground; and the people ate them with the blood. Then they told Saul, saying, “Behold, the people are sinning against YAHWEH by eating with the blood.” And he said, “You have acted treacherously; roll a great stone to me today.”Saul said, “Disperse yourselves among the people and say to them, ‘Each one of you bring me his ox or his sheep, and slaughter it here and eat; and do not sin against YAHWEH by eating with the blood.”’ You want to make certain that the blood is drained from the animal. Some people soak the meat in salt water because the salt will draw the blood out, but this could be a “gray area” because scripture does not say you must soak the meat. The example here in 1 Samuel seems to indicate they were slaughtered on the ground initially, so the blood could not be drained (as the blood would just run out on the ground where the meat was laying). When they brought them to Saul, perhaps they were hung so the blood could more thoroughly drain out. If you shoot wild birds, it is a good idea to soak them in salt water before freezing, because it helps in making it less tough.

There is also a bit said about the fat of meat. Leviticus 7:23-24, Speak to the sons of Israel, saying, “You shall not eat any fat from an ox, a sheep or a goat. Also the fat of an animal which dies and the fat of an animal torn by beasts may be put to any other use, but you must certainly not eat it.” YAHWEH permits animals to be used for various purposes, even if we are not to eat it, and this is a good example.

The biggest thing to remember is this: IF you think something is unclean, it would be prudent for you not to eat it until you verify its cleanliness. “If in doubt, do without” is a good rule of thumb and pray always for YAHWEH’S help (Matthew 21:22; Revelation 3:20).

May our Heavenly Father guide you as you walk towards Him!

Acknowledgement:  This article is made available by Yahweh’s Assembly in Messiah for our edification and salvation of our souls.