Call on His name. - Word of Yahweh Ministry 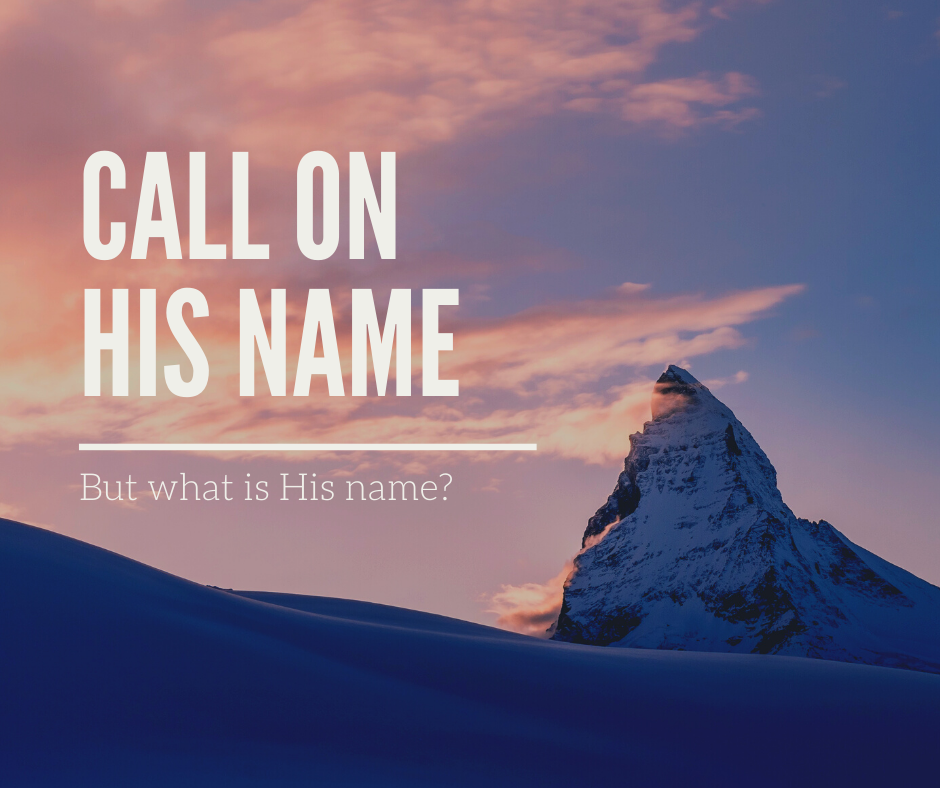 But what is His name?

TO most readers , the title above may be seen as a rhetorical question as the answer is obvious. But is it really obvious, or have traditions and customs over the years taught us otherwise?

While the importance of using the correct name of the Heavenly Father, Yahweh, is widely accepted by a growing number of people, others may say “He has many names” or “His true name is not known”, therefore downplaying the importance of His name. many active churchgoers would be startled to learn that the name they had been using to refer to the Heavenly Father for many years is not the correct name. Is it a lack of knowledge, is it negligence or is convenience?

The Heavenly Father has only one name and His name is Yahweh. His name has been known to man from the beginning. However, His name has been removed from the Bible. Why? It all began with a Jewish tradition called the “ineffable name” doctrine. the old testament was originally written in ancient Hebrew, with a few exceptions. Its alphabet consists of 22 characters, all consonants. Therefore, in the original Hebrew the heavenly Father’s name was written as יהוה, in English characters as YHWH, called the tetragrammaton.

The Jews believe that the divine name was regarded as too sacred to be uttered. They thought that using the true name would constitute a violation of the third commandment (“You shall not take the name of Yahweh your Elohim in vain …”). It was thus replaced vocally in the synagogue ritual by the Hebrew word Adonai (“my Lord”). When the Septuagint (the Greek version of the old testament) was translated, it replaced the Hebrewword YHWH with the Greek word for “lord” (kyrios). Thus the new testament writers who were Jews and quoting the Septuagint, never used the name “Yahweh” in the new testament, but rather used “Kyrios” (lord) in its place.

This is my name forever, the name by which I am to be remembered from generation to generation.” (Exodus 3:14-15) From these few verses many preachers conclude “His name is “I Am”
or “I Am WHO I Am”. Others say, His reference to the term “I Am WHO I Am” suggests He has many names. But they ignore the second part of the scripture.

The importance of the name

While many Christians have admitted that Yahweh is the proper and correct name of the Heavenly Father, some quickly add, it is not important to use that name as He has many names. They refer to El Shaddai, Jireh, Shalom as examples of His many names; however, these are all titles. El Shaddai means “Supplier”; Jireh means “Provider”; and Shalom means “Peace”. These are just some of the many attributes that express who Yahweh is, but not His name.

Yahweh’s response to those who say He has many names can be found in Psalm 83:18, “That men may know that thou, whose name alone is YAHWEH, art the most high over all the earth.”

It has also been suggested that the use of the name Yahweh is not that important. The argument presented is that, the Father knows that they are referring to Him when they say God or Lord. We are told in Isaiah 42:8 (King James Version) I am Yahweh: that is my name: and my glory will I not give to another, neither my praise to graven image. Therefore calling on any other name or title would be offering praise and glory to that name and not Yahweh as we are required to do.

Others may say, we cannot be certain of His name. For those who claim that we cannot be certain on His name, Yahweh says: “Therefore my people shall know my name: therefore they shall know in that day that I am He that doth speak: behold, it is I” (in Isaiah 52:6). Jeremiah 16:21 adds: “I am going to teach them mypower and my might, and they shall know that my name is Yahweh”. Clear indications that the name of the father is known and there shall be no uncertainty about His name.

What’s in a name?

In the Bible, names held great significance; Hastings Direction of the Bible states “from the earliest times the name given to a child was supposed to indicate some characteristic of the person; of the circumstances, trivial or momentous, connected with his or her birth; of the hopes, beliefs, or feelings of the parent”.

Shem is the Hebrew word used to denote a “name”. Yet, shem means much more than a “name” in our present English sense of the term. It serves not only as a mark or memorial of individuality but implies “honour, authority, character” and “renown”. (r. Clover, the Sacred name, Vol. 1 2002). According to the Strong’s concordance (# 8034) Shem is a primitive word for an appellation, as a mark or memorial of individuality; by implication honour, authority, character. Therefore Yahweh’s name represents His mark, His authority and His character. Thus no other name can convey what the name Yahweh represents.

We see numerous examples in the Bible when names were assigned orchanged to reflect the functions and duties of the individual. This can be supported by Yahweh’s decision to change Abram’s name to “Abraham”. His wife’s name was changed from “Sarai”, to “Sarah” (Genesis 17:5 & 15).

The meaning of His name

“I Am who I Am” or “I will be who I will be”, or “the Self-Existent One” are just some of the meanings suggested for Yahweh’s name. I Am is derived from the Hebrew verb of existence “hayah”, the three-letter root word from which the name ‘Yahweh’ is derived. Some scholars say it also means I will be whatever I want to be or need to be. He explained His Name and its significance in exodus 3. The Brown-Driver-Briggs Hebrew lexicon defines hayah as to be, become, come to pass, exist, happen, fall out. Therefore the primitive root of the name Yahweh means “to exist” or “to be”. This is a description of Yahweh’s eternal existence, but not His name.

But I speak English

Another, and in my opinion, the weakest agreement presented for not using the name Yahweh is that, it is a Hebrew name and we speak English. Any student of the English language knows that personal names are transliterated, never translated. Transliteration is the process of writing a letter or word using the closest corresponding letters of a different alphabet or language. The most ancient Bible manuscripts were written in the Hebrew language.
The Heavenly Father’s name was therefore originally written in Hebrew as הוהי (tetragrammaton).
YHWH, pronounced Yahweh, is the English transliteration of the Tetragrammaton, the four Hebrew letters representing Heavenly Father’s name. His name was therefore transliterated from הוהי to YHWH.